In her final project, BA (Hons) Animation graduate Izzy Argent explores and celebrates her own body image to inspire others to love theirs. 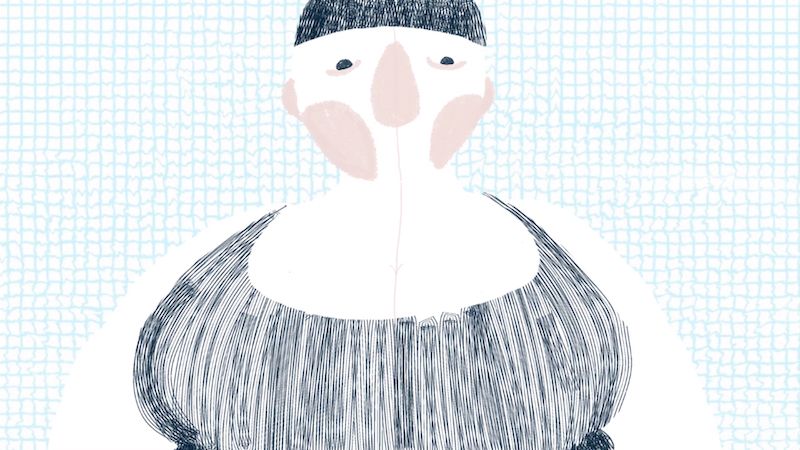 Izzy had an open brief for her final project and chose to create a hand-drawn 2D animation film, called Changing Room, based on her own experiences with body image.

“I’ve made films in the past that have explored subjects I’m interested in, but never anything I’ve actually been through,” she says. “This time, I wanted to take things a step further and make something personal, something I would want to see myself, so I chose to make a film that inspires body positivity.”

Her film shows a character who Izzy describes as having “hip dips, leg hair, saggy boobs and fat,” who goes swimming. “She’s a normal woman, or at least what the majority of women look like, as almost everyone has body hair and is above a size 6," Izzy explains. "I also wanted to feature a character that people of a certain size could relate to and enjoy on-screen. The aim is to hopefully normalise these things, and to create a positive message that says you have the right to enjoy your life and the activities you pursue regardless of other people, or your own insecurities.”

"People who’ve watched the film tell me they've tried on their swimsuits, twisted and turned in the mirror, and thought of my character, and I love that. I hope they remember the ending, where the character is at peace with her body."

“Entering a changing room, struggling with a swimsuit that doesn't hide your body, not enjoying swimming because of being self-conscious – these are all things I’ve experienced,” she says. “After Covid restrictions lifted, I went swimming alone for the first time and it was so liberating. Of course, no one cares about your body but you, and that's what I wanted to show in the film. "With this project, I'm proud of myself for leaving my comfort zone and making something personal," she adds. "To now be able to confidently say: 'Hey, I'm fat, and I'm also so much more than that," and to be able to go swimming or to a restaurant completely alone and not care. I hope that impact translates to whoever watches the film – it does seem to resonate. People who’ve watched it tell me they've tried on their swimsuit and twisted and turned in the mirror and thought of my character, and I love that. I hope they remember the ending where the character is at peace with her body.”

The pandemic was in full force when Izzy began making her film, so the emphasis was on finding a concept something that could be brought to life from her home.

“I love hand-drawn animation and using texture in my films, so I incorporated gloopy melted plasticine and oil pastel mixture for the underwater scenes," she says. "I also wanted to represent the complex internal feelings of the character, and abstract imagery felt like the best way to do that.”

Improvised sounds, also recorded at home, include a wet swimsuit being slapped against skin and footsteps in the bath to represent feet on pool tiles.

Izzy’s original path into animation came via a foundation course in Art and Design at Oxford Brookes University. “It really pushed me to try new things and led me to discover the UCA course,” she says. “My tutor told me: if you're interested in animation, you have to go to UCA Farnham.

"I've always been into films and the theory behind them, but I didn't consider animation until I took an introductory course at Oxford Brookes. We learned how to create animated gifs in photoshop and ever since then I've been hooked. Animation is a combination of all the things I love - film, art, and exploring interesting subjects. What I love most about it is that it gives you the ability to do anything. For me, it's the most freeing medium and it's a lot easier to express what you want to, even though it takes longer than other art forms.”

Izzy’s next goal is to make another body-positive film, and hopefully a sex-positive one too. “Currently, I'm working at an independent film company and have just completed some freelance work, so the aim is to establish myself as an animator while working on personal films in my spare time,” she says.

You can see more of Izzy’s work on her website, www.izzyargent.com, or visit our subject pages to find out more about our Animation courses.